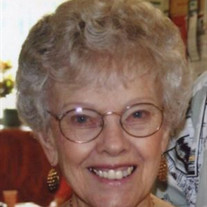 Patricia Lu (Hamilton) Abbas, 89, of Hampton, Iowa passed away Saturday, December 2, 2017, at the Franklin Country View Nursing Facility in Hampton where she resided for two years. She was born on March 9, 1928, in Hampton, to C.S. (Pat) Hamilton, Jr. and Lulu Mae Eitel Hamilton. Pat was baptized at the Methodist Church in Hampton. She graduated from Hampton High School, class of 1946. Pat was united in marriage to Melvin Abel Abbas on September 1, 1946 at the Methodist Church in Hampton, where she was a member. To this union two children were born, Valerie Jean and David Mel. Pat and Mel lived and farmed southeast of Hampton until 1972, when they moved to Geneva. Mel continue to farm until 1995, when he retired. Pat served as City Clerk in Geneva for eight years. Pat was devoted to her family, always putting them first, and loved spending time with them. Her grandchildren and great-grandchildren were a special joy for her. Her first love, after her family, was music. Pat sang in a trio with her sister Barb and friend Joan Paine, the Franklin County Chorale, ODM chorus, and was a member of the Treble Clef Club. She was a member of St. Peter's UCC and expressed her faith through music, directing choir for over forty years. Pat played the organ, directed choirs, and taught piano for many years. She was a member of Women's Fellowship, taught Sunday School, and was on several music and organ committees. Also was a Life Member of FGH Auxiliary. She was preceded in death by her husband, parents, five brothers, Robert, C.J. (Bud), Howard, Stanley and Dean, one sister Bonnie, two brothers-in-law Lawrence and Howard Abbas, and one sister-in-law Ruth Abbas. Pat is survived by her daughter Valerie Creel of High Rolls, NM, son David (Joan) of Iowa Falls, grandsons Ron (Nancy) Creel of Rome, GA, Chris (Stephanie) Creel of High Rolls, and Ross (Emma) Abbas of Iowa Falls, great-grandsons Connor Creel of GA, Michael, Luke and John Creel, all of High Rolls, great-granddaughter Liberty Marie Abbas of Iowa Falls, sister Barbara Powers of La Junta, CO, brother-in-law Fred (Mary) Abbas of Geneva, sisters-in-law Marge Gallogly of Colorado Springs, CO, Ellen (Dean) Weaver of Boone, Mary Ann (Leland) Roegner of Nevada, and Dotty Abbas of Hampton, along with many nieces and nephews.

Patricia Lu (Hamilton) Abbas, 89, of Hampton, Iowa passed away Saturday, December 2, 2017, at the Franklin Country View Nursing Facility in Hampton where she resided for two years. She was born on March 9, 1928, in Hampton, to C.S. (Pat) Hamilton,... View Obituary & Service Information

The family of Patricia Lu Abbas created this Life Tributes page to make it easy to share your memories.

Send flowers to the Abbas family.