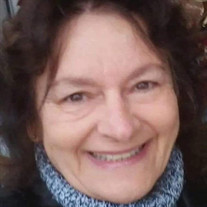 Patty Ann Kiefer, 74, of Thornton, passed away Thursday, March 3, 2022, at MercyOne North Iowa Medical Center in Mason City. A public visitation will be held from 4 p.m. to 7 p.m. Wednesday, March 9, at the Counsell Woodley Funeral Home in Thornton. A funeral service will take place at 10:30 a.m., March 10, at the Clear Lake Open Bible Church where she attended regularly for many years. Burial will take place at a later date. The Counsell Woodley Funeral Home of Thornton is caring for Patty and her family. Patty was born April 1, 1947, in Des Moines, Iowa, to parents Ernest and Estella (Jose) Thompson. Patty was the oldest of 6 and loved her younger siblings as her own. Patty completed 10th grade at Lincoln High in Des Moines, but she was unable to finish since she helped care for her younger siblings. She took vocational training to be a Head Start helper at Dunlap School and hairstyling classes at Thompson School of Beauty. She married Kenneth Kiefer on October 21, 1964, in Des Moines. Together they raised their children, and over the span of 20 years took care of over 150 foster children as well. Since her high school years Patty worked a variety of jobs. Most of the jobs were short term, as her family priorities came first. Patty worked as a nurse’s aide, maid, and as part owner and cook at the airport restaurant. She had also driven truck across the country for Kiefer Built, which she was always very proud of, and was known as “Peppermint Patty” on CB. Her last official position was as cook and waitress at the Chit Chat Café in Thornton, Iowa. She enjoyed many years there getting to know and befriending those in her community. Even up until this last year Patty was working hard, whether it be housekeeping or caretaking. Being a caretaker, mother, grandmother, and great-grandmother were the most important roles in her life. Patty was a people person with a big heart. She didn't have to be related to you to treat you like family, and she didn't have to know you to love you. She enjoyed grilling out and having potlucks with her friends and family. She loved taking her kids on trips. Patty also liked to go camping and loved to fish. Her only “vice” per her was going to play Bingo with loved ones. Patty was a God-fearing woman, full of love, especially to those in need. She also would speak her truth if she felt her family or friends needed a guiding hand. She has always had a strong sense of commitment to those who are close to her. Left to cherish her memory include her daughter, Janey (Jim) Burik and their children, Damian Reimer and Desirae (Mike) Lowell and their children, Nora, Michael, Xavia, Bentley and Layne; son, Ken (Lori) Kiefer, Jr., and their children McKenzie Kiefer and Devon Kiefer; Devon's children, Haven, Colton, and Jaxton; daughter, Tonya (Mark) Shehata and their twin boys Thomas and Antonios; daughter, Tammy (Jake) Charlson, a brother, Troy (Sherry) Thompson, and her sisters, Irene Thompson and Dorothy (Danny) O'Donnell, as well as many nieces and nephews whom she all loved dearly. She was preceded in death by her parents, her brother Ernie, her sister Peggy, and two stillborn grandchildren, Zachary and Jenna Kiefer.

The family of Patty Ann Kiefer created this Life Tributes page to make it easy to share your memories.

Send flowers to the Kiefer family.