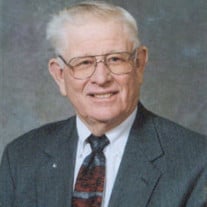 Paul H. Gerdes, 82, of Dumont, Iowa, passed away November 16, 2010, at Mercy Medical Center North Iowa in Mason City, Iowa. Paul H. Gerdes was born July 9, 1928 to Dirk and Stena Greenfield Gerdes at the family farm, rural Dumont. He was educated through the eighth grade at Madison 4 country school. He went on to graduate from Reisch Auctioneer School at Mason City. Married to Margaret Becker on September 1, 1950 at St. John's Evangelical Reformed Church in Ackley, Iowa. He and Margaret made their home for 60 years in the same house he was born in. Paul was a lifelong farmer, raising corn, soybeans, hogs, and cattle. He started out farming with teams of horses and graduated to his treasured JD Gator. Paul was a 4-H leader, served on the County Compensation Board, was a member of the Soybean Association, was active in the Republican party, served on the Dumont Community School Board, and was a member of the Dumont Lions Club. He was very active in Butler County and state Farm Bureau having served as president, voting delegate and several other offices and responsibilities. He was named a Master Swine Producer, which was quite an accomplishment in its day. Paul was a member of IPLA (Interstate Producers Livestock Association) and served on the board of directors. He was also a seed sales dealer for DeKalb for many years. Paul was a member of the Dumont Reformed Church and was a gifted lay speaker and shared his faith and messages with many area church congregations. He was a Gideons member and he and Margaret very much enjoyed their fellowship with other Gideon members. Paul also made calls on Butler County jail prisoners, sharing his faith and giving Gideon Bibles. Paul is survived by his wife, Margaret, daughter Marilyn (Roger) Freeman of Clear Lake, son Mark (Deb) of Aredale, grandchildren David (Shanna) Freeman and Andrea (Derek) Nyhus of Plymouth, MN, Jodi (Harv) Demuth of Osage, Kelli (Shane) Roenfanz of West Des Moines, and Maggie Gerdes of Waverly, great grandchildren Tyler Nyhus, Josephine Freeman and Morgan Nyhus, brothers Robert (Darlene) Gerdes of Allison and Herman (Donna) Gerdes of Stomsberg, NE, sister-in-law Hazel Fuller and brother-in-law J. Frederick Freese of Ackley along with many nieces and nephews. He was preceded in death by his parents and grandparents, infant brother, and nephew (Doug Gerdes). Burial will take place in the Dumont Cemetery.

The family of Paul H. Gerdes created this Life Tributes page to make it easy to share your memories.

Send flowers to the Gerdes family.