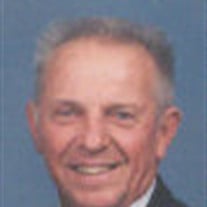 Paul Herman Jurgens, age 82, who lived in Latimer, Iowa, died December 5, 2010, after a lingering illness at the Rehabilitation Center of Hampton. He was a fifth child of Toby and Ernestena (nee Koenen) Jurgens, born on July 7, 1928, on a farm home one mile south of Zion Reformed Church of rural Sheffield, Iowa. He married Betty Thielen on August 15, 1950, which later ended in a divorce. On September 2, 1985, he married Marie Neuberger-Miller at the Alexander United Methodist Church in Alexander, Iowa. Paul was baptized into the Christian faith at Zion Reformed church (by Rev. Paul Achtermann) in 1928. He attended Plainview Grade School which was one-half mile south of Zion Reformed Church and Chapin High School. Paul made confession of his faith in Jesus Christ as his Lord and Savior in 1949 (under the pastorate of Rev. Johann Schmidt). He took part in the church school and youth group, men's meetings, and was a member of the consistory. Paul farmed in Franklin County and in later years had a small engine repair shop. Paul has left behind a lifetime of many good memories of time and work spent in the company of his family and friends. He especially enjoyed caring for grandson's who spent many hours in his company, Paul also was a volunteer fireman for the Latimer Fire Department. He is survived by his wife Marie Jurgens of Latimer, step son James (Jill) Miller of Clear Lake, step son Robert (Pat) Miller of Sauke Centre, Minnesota, step daughter Kristy (Mike) Oswald of Des Moines, step son Therron (Marsha) Miller of Latimer, brother David (Dixie) Jurgens of Marion, sister-in-law Frieda Jurgens of Belmond, sister-in-law Dorothy Jurgens of Thornton, brother-in-law Otto Dannen of Latimer, son-in-law Greg Bakker and by many nephews and nieces and grand nephews and nieces and also many other in laws, eleven grandchildren and three great grandchildren. Paul was preceded in death by his parents, daughter Deborah Kay Bakker, brothers Jerry (Adeline) Jurgens, Lloyd Jurgens and Calvin Jurgens, sister Thelma Dannen and a granddaughter Holly Miller. Burial will be in the Zion Reformed Church Cemetery.

Paul Herman Jurgens, age 82, who lived in Latimer, Iowa, died December 5, 2010, after a lingering illness at the Rehabilitation Center of Hampton. He was a fifth child of Toby and Ernestena (nee Koenen) Jurgens, born on July 7, 1928, on a farm... View Obituary & Service Information

The family of Paul Herman Jurgens created this Life Tributes page to make it easy to share your memories.

Send flowers to the Jurgens family.