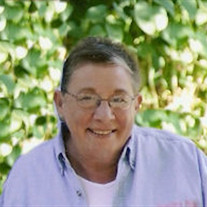 Pauline "Polly" Rodemeyer, 67, of Hampton, Iowa, passed away February 7, 2011, at the Franklin General Hospital in Hampton, Iowa. She was born March 24, 1943, in Hampton, Iowa, to Bernard and Olinda (Lemke) Muhlenbruck. Polly married Laverne Rodemeyer on February 11, 1962, at St.Paul's Lutheran Church in Latimer, Iowa. She was a homemaker and a custodian for the Hampton-Dumont School system. Polly was a member of the Trinity Lutheran Church in Hampton, where she was an active member. She served as Sunday School Superintendent and a member of the choir for many years. She enjoyed spending time with her grandchildren and family, also enjoyed baking, sewing and crafts. Polly is survived by her husband Laverne Rodemeyer of Hampton, daughter Stephanie (Chuck) Laudner of Rockford, daughter Audra (Kory) Meyeraan of Des Moines, grandchildren Jonathon & Emily Laudner and Trenton & Brandon Meyeraan, brother-in-law Robert (Susan) Filbrandt of Lake Mills, mother-in-law Carlotta Rodemeyer of Latimer, sister-in-law Linda Thompson of Le Grand, sister-in-law Carla (Mike) Oleson of Latimer, sister-in-law Jolene (Doug) McWilliams of Latimer and many nieces and nephews. She is preceded in death by her parents and her sister Bonnie Filbrandt. Burial will be in the Trinity Lutheran Church Cemetery, rural Hampton.

The family of Pauline "Polly" Rodemeyer created this Life Tributes page to make it easy to share your memories.

Send flowers to the Rodemeyer family.