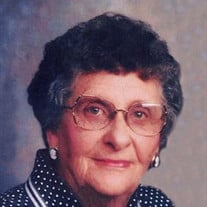 Phyllis Faye Noelting, 93, of Dumont, Iowa, passed away Monday, October 6, 2014, at the Dumont Wellness Center in Dumont, Iowa. She was born March 25, 1921, in, Aredale, Iowa, to Charles and Jennie (Fleming) Zimmerman. Phyllis graduated from Aredale High School, then attended college and worked as a bookkeeper. She was united in marriage to Darwin Noelting on June 20, 1946, in Dumont, Iowa. Phyllis loved her family and farm life and lived on the farm for many years until retiring with Darwin in 1986. She was a member of the New Hope Parish of the United Methodist Church in Aredale and Dumont. As a young girl she played the piano and guitar often playing with her sister Lois and cousins, the Barnett Boys, entertaining family and friends. Phyllis was an active member of her community and participated in various clubs such as her Homemaker Study Club and Better Way Club. She was a member of the Rebekah Lodge, Farm Bureau Ladies, church circles and was a lifetime volunteer for cancer and disabled veterans often being chairperson for several committees. Phyllis was an accomplished seamstress and also enjoyed knitting, crocheting, cross stitch, ceramics, quilting and bowling. She also enjoyed baking and many times Darwin would do the delivering for her. Phyllis is survived by her daughter Donice Raisch of Dumont, grandchildren Matthew Raisch of Waynsville, North Carolina, Ryan Raisch of Kansas City, Missouri, Jonathan (Courtney) Noelting of Dumont, Joel (Kayla) Noelting of Greene, Rachel (Toby) Noelting of Ankeny and Samuel Noelting of Aredale, niece Pamela (Dave) Rusinack of Sheffield, nephews Mark Johnson (Judy Thomas) of Aredale and Kent (Kelly) Johnson of Woodbury, Minnesota. She was preceded in death by her parents, husband Darwin, son Blair and sister Lois Johnson.

The family of Phyllis F. Noelting created this Life Tributes page to make it easy to share your memories.

Send flowers to the Noelting family.