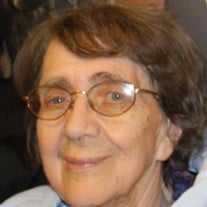 Phyllis Ann Warwick, 78, of Coulter, passed away on Sunday, October 20, 2013, at the Franklin Country View Nursing Facility in Hampton. Funeral services will be held at 10:30 a.m., Saturday, October 26, at St. Paul's Lutheran Church in Latimer with Rev. Travis Berg officiating. Visitation will be held from 5 p.m. to 7 p.m., Friday, October 25 at Sietsema-Vogel Funeral Home of Hampton. Burial will take place in the Coulter Cemetery. Phyllis Warwick (otherwise known as Willie) was born on April 22, 1935 to Jeanette Williams of Eldora. She graduated from Eldora High School in 1953, and on August 1, of that same year, Phyllis married Allen J. Warwick. Together, they spent their first years living in Western Iowa, eventually moving to Latimer in 1958 where Allen was employed with Central Telephone until his retirement. In 1965, the family made their final move to the acreage in Coulter, taking up an idyllic small-farm life, as well. Phyllis spent her years as homemaker; active member of St. Paul's Lutheran Church in Latimer, as a member of Lutheran Ladies Aid; as a member of the Coulter Community Center - original site of the local Over 60s program still currently enjoyed; and active participant with the Franklin County Republican Party. Another venture she relished was her long tenure as writer of the Coulter News for the Hampton Times and Chronicle. She loved working in her huge gardens and canning her vast amount of produce to feed anyone who ventured through the door. Yet, Willie's pride and joy were her four sons and their many ballgames and activities, and grandchildren and great-grandchildren as the family grew. Most notably throughout her life, her home had an open door policy where friends, family and kids were always welcome for lively conversation, a pot of coffee, tacos and a "swiller" (Pepsi) or two. Prior to her stroke in her later years, she loved "going coffee-ing"; shopping; hosting holidays for and pulling pranks on her family. But listening to music, acquiring anything pink, having dear friends of all ages stop by, and keeping in touch with all her grandchildren, great-grandchildren and their lives on Facebook never diminished. Phyllis is survived by sister Barb (Arnie) Carlson of Marcus; son Jim (Katherine) Warwick of Coulter; son Patrick (Dee) Warwick of Rifle, Colo.; son Thomas (Pamela) Warwick of Coulter; son Doug (Diane) Warwick of Mason City; 15 grandchild and their spouses; 16 great-grandchildren with two more due within days; three dear sets of brother and sisters-in-law; many nieces, nephews and life-long friends. She was preceded in death by her mother, her husband, Allen, and daughter-in-law, Peggy. She will be deeply missed.

The family of Phyllis Ann Warwick created this Life Tributes page to make it easy to share your memories.

Phyllis Ann Warwick, 78, of Coulter, passed away on Sunday, October...

Send flowers to the Warwick family.