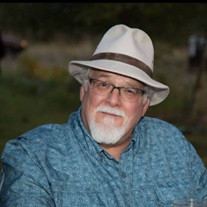 Randal James Bobst (1954-2016) Our beloved Randy passed away unexpectedly on October 3, 2016 in the company of his wife, Ann, at the Mercy Medical Center in Mason City, Iowa. He was born September 24, 1954 in Ames, Iowa to parents James and Ardith (Faber) Bobst. He graduated from Hampton High School in 1972 and went on to pursue studies at Iowa State University and the University of Northern Iowa. Randy's deep sense of caring for others led him to pursue a degree in counseling. He obtained his masters degree from the University of Iowa and moved to the Twin Cities where he worked as an Employee Assistance Manager. Most recently, Randy worked as a substance abuse and family counselor. Randy's caring personality extended far beyond the workplace. His generous nature made him a friend of everyone he met. He could find the positive side to every situation and taught those around him to do the same. He was a source of light, joy, laughter and wisdom to all those he met. Randy's happiest moments were out on the lake fishing, spending time with family, spoiling his dogs with McDonald's ice cream cones, and every fall convincing people that this was the year the Vikings were going to the Super Bowl. In addition to his gift of connecting with those around him, Randy also loved the birds that flocked to his feeders. His feeding stations were always full and he would call attention to the unusual birds that came to visit. Thanks to his dad, Randy developed a deep appreciation for the natural world and every spring and fall, he paid close attention to the farm planting and harvest seasons. Above all, Randy had the gift of good nature and quiet enjoyment. His friends and family appreciated his non-judgmental acceptance, his quick wit, and his kind and generous spirit. He will be deeply missed but his spirit will live on forever in our hearts. He is survived by his wife Ann, daughters Brooke (Liz) Jamison and Abby Lukensmeyer, mother Ardith Hill, stepmother Kathy Bobst, siblings Jane (Steve) Haviland, Deb (Tim) Primus, John (Erica) Bobst, and Angie (Kreg) Menning, and many other beloved family members. He is preceded in death by his father James (Jim) Bobst and his cousin Mike Hanson. We will be collecting unique pieces of fishing tackle in honor of Randy at the visitation on Sunday. If you would like to contribute, please bring your item with you and we will place it in a bowl on the table.

Randal James Bobst (1954-2016) Our beloved Randy passed away unexpectedly on October 3, 2016 in the company of his wife, Ann, at the Mercy Medical Center in Mason City, Iowa. He was born September 24, 1954 in Ames, Iowa to parents James and... View Obituary & Service Information

The family of Randal "Randy" J. Bobst created this Life Tributes page to make it easy to share your memories.