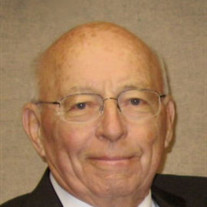 Raymond P. Drew, 80, of Hampton, Iowa, passed away peacefully on August 31, 2011, at the Franklin General Hospital in Hampton, Iowa. He was born December 18, 1930, in Winneshiek County, Iowa, to Raymond P. and Theresa (Carolan) Drew Sr. Ray graduated from Decorah High School and served in the United States Marine Corp. After he returned, he first attended Loras College and then graduated from the University of Iowa. He went on to study law and received his J.D. in 1960 from the University of Iowa College of Law. After graduating in 1960, Ray moved to Hampton with good friend and classmate Larry Gilchrist to open a law office. He later joined AJ Hobson and GA Cady II in the firm that became Hobson, Cady and Drew. In 1990 he opened the Drew Law Firm where he finished his career. His proudest time spent practicing law was when he partnered with his two sons. He was a 50-year member of the Iowa State Bar Association (ISBA) and served on the ISBA Board of Governors from 1986 until 1990. In June 2010 he was recognized as a fifty-year member of the ISBA and was chosen to be the featured speaker from the class at the ceremony. Throughout his time in Hampton, he was involved in numerous organizations. He was particularly proud to serve as the chairman of the Franklin County Veterans Affairs Commission for 40 years. He also was instrumental in forming the Hampton Public Library Foundation and served on its board of directors for 22 years, from 1988-2010. Ray married Kay Grabbe on June 20, 1980, in San Francisco, California. They enjoyed 31 happy years together. He was a member of St. John's Episcopal Church in Mason City, Iowa. His favorite past times included fishing in Canada with Kay, golfing with good friends, and spending time outdoors on his acreage. He had a deep love for music and played saxophone in the George Krum Big Band in the 1950's and continued to play saxophone, piano, organ, and accordion all of his life. One of his greatest sources of pride was his children and grandchildren. To his grandkids, he was affectionately known as Boppie. Ray is survived by his wife Kay Drew of Hampton, son Jim (Stacie) Drew of Hampton, son Tom (Julie) Drew of Des Moines, daughter Ann (Raymond) Drew Yu of St. Louis Park, Minnesota, step daughter Beebe (Chuck) Young of Galesburg, Illinois, step daughter Suzy Grabbe of Burnsville, Minnesota, brother Daniel (Betty Mae) Drew of Decorah and eleven grandchildren. He was preceded in death by his parents and brother Robert. Memorials may be directed to the Hampton Public Library Foundation.

The family of Raymond P. Drew created this Life Tributes page to make it easy to share your memories.

Send flowers to the Drew family.