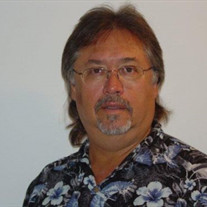 Joel Eddy, 53, of Latimer, passed away, Wednesday, February 29, 2012, as a result of a traffic accident on Highway 3, near his home in Latimer. He was born December 24, 1958, in Dodge City, Kansas to George and Johanna (Steinmetz) Eddy and the eldest of three siblings. He graduated from Pratt High School in Pratt, Kansas in 1977, where he also worked after school as an automotive mechanic. Upon graduation, he worked at RR Tank in Pratt, Kansas and at Cross Hydraulics Manufacturing in Greensburg, Kansas. In 1978, Joel moved to Coulter along with his family to work with his father and brother at Century Machine in Coulter where he was a machinist. He later held positions at Mort's Pump & Plumbing Company as a Water Specialist and at the SeaBee Corporation heading the CNC department as a machine programmer. Joel was always a disciplinary, self- taught, self-motivated leader and loved challenging opportunities. He always joked he was the "chief cook and bottle washer" and that he was. With a self-taught, thirst for knowledge and a perfectionist like no other. He was a man of wisdom, knowledge and a strong determination to lead. He was always thirsting for knowledge in reading, blogging, researching and speaking. Joel would reference that he was the "jack of all trades-master of none". He attended college and achieved a Microsoft Certified Systems Engineer's degree, where he was only 1 of 3, out of a class of 18, to graduate with honors. His passion evolved in 1995 as the pioneer of Iowa Connect in the very infancy and evolving Bulletin Board/Internet Industry. Joel later became a member of the Des Moines Linux Club, furthering himself in the advancement of technology. In 2001 he built his own 192' telecommunications tower at his current office location, climbing such height to service and maintain his own equipment. Joel had such a spontaneous energy for life. He gave of himself unselfishly to family, community and business. Joel could always be seen going around town in his little white service truck and wearing his bright Hawaiian shirt. He always looked forward, at the end of the week, to his "date night" with his wife on the trike. He had a passion for gardening, motorcycles and enjoyed many trips out with family and friends. Through all the adversities in life, he could always find solace in his two companions Buster and Princess aka Iowa Connect office guard dogs. Joel served in the community as a member of the Coulter City Council, Latimer City Council and Coulter Fire Department. He was a loving husband to his wife, soul mate and business partner Priscilla and a devoted father to his children, Sarah and Sheldon. He will be missed greatly. He is survived by his wife Priscilla of Latimer, daughter Sarah and husband Russ Burgess of Fairfax, son Sheldon Eddy of Latimer, parents George and Johanna Eddy of Coulter, brother Mike and wife Beth Eddy of Coulter, sister Venica and husband Jim Katz of Lewis, Kansas, brother-in-laws Tracy Morton of Coulter, Jason Morton of Coulter, Seth Morton of Coulter, Reginald Morton of Hampton, Robert Morton of Iowa Falls and Kent Morton of Latimer. Joel was preceded in death by his maternal and paternal grandparents, mother and father in law Mr. & Mrs. EJ Morton and a brother in law Lance Morton.

Joel Eddy, 53, of Latimer, passed away, Wednesday, February 29, 2012, as a result of a traffic accident on Highway 3, near his home in Latimer. He was born December 24, 1958, in Dodge City, Kansas to George and Johanna (Steinmetz) Eddy and the... View Obituary & Service Information

The family of Raymond Joel Eddy created this Life Tributes page to make it easy to share your memories.

Send flowers to the Eddy family.