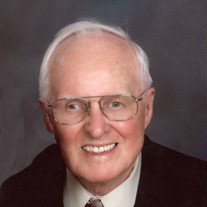 Rex T. Aldinger, 93, of Hampton, Iowa, passed away July2, 2012, at the Rehabilitation Center of Hampton in Hampton, Iowa. He was born May 3, 1919, in Hampton, Iowa, to William and Pansy (Potter) Aldinger. Rex graduated from Alexander High School in Alexander, Iowa. He served his country in the United States Army in World War II. Rex was united in marriage to Betty Quintus on January 23, 1944, in Garner, Iowa. He worked most of his life at W.P. Aldinger Store and Produce in Alexander, Iowa, and became owner and operator of the store after his father passed away, Rex retired in 1985. He was an active member of the Alexander Community Club, Hampton United Methodist Church, serving on various committees, and the Hampton American Legion where he volunteered his time as squad Bugler. Rex preformed taps at graveside services from 1947 until 2012. He had a great passion for selling, golf and dancing with Betty. Rex is survived by his wife Betty of Hampton, son Dwight & wife Pam of Bellevue, Nebraska, daughter Kathy & husband Gary Kriegel, granddaughter Tara & husband Corey Rife of Omaha, Nebraska, granddaughter Candy & husband Todd Golden of Omaha, Nebraska and great grandchildren Mara, Ryan and Connor Golden and Sophie, Saddie and Sam Rife. He was preceded in death by his parents and Brother Franz. Burial Will take place at the Hampton Cemetery in Hampton, Iowa.

The family of Rex T. Aldinger created this Life Tributes page to make it easy to share your memories.

Send flowers to the Aldinger family.