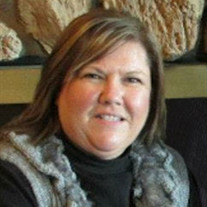 Rhonda Marie Allen, 51, of New Hartford, Iowa, passed away Sunday, March 26, 2017, at her home in New Hartford. She was born on November 14, 1965. Rhonda graduated from Dumont High School and attended Spencer College of Business in Spencer, Iowa. She worked as the manager for Parker Place in Parkersburg. Rhonda was an active member of the Reformed Church of Stout. She was a devout Christian, always finding time to read her devotional and bible daily. Rhonda was a mother, spouse, daughter, sister, aunt, and friend. Rhonda had an old soul with a kindred spirit. She would do anything for anyone in need and never missed a chance to help another person in need. She had a thousand watt smile that was unforgettable. She took the chance to speak or learn something new from someone. She enjoyed spending her time with family and friends, never taking her time for granted with them. Rhonda was adventurous, with a love of travel. Rhonda enjoyed traveling out west to Colorado with her daughter Tiffany, spending weekends fishing and boating in Minnesota with Daryl, going to the apple orchards in Wisconsin with friends, and traveling to Kansas to spend time with family. During this time, Rhonda would not like us to be sad, but rather remember her and think of all the good memories that we have had with her. This is not a time to mourn, but instead celebrate her life. Rhonda is survived by her daughter Tiffany Allen of New Hartford, fiancé Daryl Cornelius of New Hartford, parents Richard and Esther Eisentrager of Dumont, sister Rita Eisentrager of Sioux City, brother Roger and wife Julie (Hixson) Eisentrager of Lenexa, Kansas, nephews Conner and Zachary and niece Haylee. She was preceded in death by her maternal and paternal grandparents.

Rhonda Marie Allen, 51, of New Hartford, Iowa, passed away Sunday, March 26, 2017, at her home in New Hartford. She was born on November 14, 1965. Rhonda graduated from Dumont High School and attended Spencer College of Business in Spencer,... View Obituary & Service Information

The family of Rhonda Marie Allen created this Life Tributes page to make it easy to share your memories.

Send flowers to the Allen family.