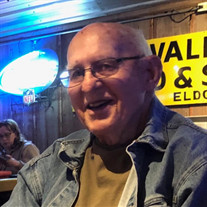 Dr. Richard M. “Doc” Swasand, 87, of Ackley, passed away Monday, May 2, 2022 at Grand JiVante in Ackley. No services are planned at this time. Counsell Woodley Funeral Home of Iowa Falls is caring for Doc and his family. Richard Moyer “Doc” Swasand was born October 3, 1934 in Bert, IA to Hans Koestler and Velda Moyer, “Bud” as he was known in the family, started life on the farm before moving to Alton, IA after his father died and his mother remarried Edward Swasand. Big for his age, Bud started school a year early in a 1 room schoolhouse and graduated as valedictorian (7 Seniors) from Alton HS in 1952. He was a stand-out on the boys basketball team that went to State Tournament his Senior year. The principal noted of Bud “he’s very responsible… whenever something is up, he’s usually responsible for it!” This mischievous nature followed Doc as he worked in odd jobs- as a welder’s helper, herding cattle in North Dakota, even gandy dancing in the railroad. (Doc would tell you to “look it up”). He waited tables at the girl’s dormitory in Ames to pay his way through Iowa State University, earning a degree of Doctor of Veterinary Medicine in 1959. During a veterinary internship in Rogersville, TN he met and despite their 1st date being to descent a skunk, later married Mary Rebecca “Becky” Rucker. Doc trained in Chicago and was stationed in San Diego with the US Army Veterinary Corp during the conflict with Korea. The couple moved to Ackley in 1962 and Doc started a mainly large animal practice with Doc Griffel. From the start, Doc was active in the Ackley community (Chamber, Legion, Jaycees), but he is best known for his work, along with Becky and friends, Dale & Leda Ibeling in founding and developing Prairie Bridges Park. Doc and Dale were both retired but they spent every day planning trails, scavenging bridges and planting trees while their spouses mowed hundreds of miles. Even when he re-retired, Doc could be found feeding chipmunks, monitoring wounded geese and thinking up ways to promote The Park. Doc Swasand always had a story or a joke or a unique way to get something done. He provided common sense & plain hard work. He will be greatly missed by his family, his friends and his community. Doc is survived by his wife, Becky of Ackley; son, Brad Swasand and spouse, Lori Kremer of St Charles, MO; daughter, Berri Swasand and spouse, Dana Swasand of Steamboat Rock, IA and their children, Ellese (son Kavik), Chloe, Abigail and Brant. He was preceded in death by his son, Flint Swasand. No funeral services are planned. Instead of gifts, consider planting a tree, feeding the birds or watching the chipmunks at the Park.

Dr. Richard M. &#8220;Doc&#8221; Swasand, 87, of Ackley, passed away Monday, May 2, 2022 at Grand JiVante in Ackley. No services are planned at this time. Counsell Woodley Funeral Home of Iowa Falls is caring for Doc and his family. Richard... View Obituary & Service Information

The family of Dr. Richard M. “Doc” Swasand created this Life Tributes page to make it easy to share your memories.