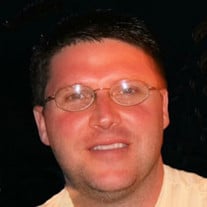 Rick E. Larson, 46, of Sheffield, Iowa, passed away Friday, January 17, 2014, at the Saint Mary's Hospital in Rochester, Minnesota. He was born December 2, 1967, in Mason City, the son of Wayne and Elizabeth "Betty" (Esser) Larson. Rick graduated in 1986 from Sheffield Chapin High School and then earned his Bachelor's degree from the University of Northern Iowa in Cedar Falls, Iowa. He was united in marriage to Cheryl Smit on October 1, 1994, in Dougherty, Iowa. To this marriage a son, Austin Matthew, was born on October 30, 1999. Rick was employed for years by Seabee Manufacturing, Kaydon, and was presently working at Hall Industries in Sheffield, Iowa. Rick believed in a strong work ethic. He attempted to bestow this virtue to his nieces and nephews by saying goodbye with his catch phrase, "write if you get work." He was a member of the Sacred Heart Catholic Church in Rockwell, Iowa. Rick was very active in the community serving on the Sheffield City Council, spearheading the merger of the local little league programs into the West Fork Little League Baseball program, and organizing the development of the Edgington baseball/softball Complex in Sheffield. Recently, he earned recognition being named Sheffield's Outstanding Citizen in 2013 for the People in the Park festivities. Rick considered himself an old soul, born in the wrong era. He enjoyed watching his Dean Martin Celebrity Roast CD sets during his free time on the weekends. He was an avid fisherman, always looking forward to and enjoying his annual fishing trips to Canada. Additionally he liked hunting, coaching his son's sports teams, and spending time with his family. Rick is survived by his wife, Cheryl Larson, and son Austin Larson of Sheffield, parents Wayne and Betty Larson of Sheffield, brother Bob (Marcia) Larson of Dougherty, sister Karen (Ray) Clark of Sheffield, sister Karla (Bob) Bradley of Marion, twin-brother Randy (Kacy) Larson of Sheffield, mother-in-law Georgia Smit of Sheffield, sister-in-law Lorri (Todd) Hall of Sheffield, sister-in-law Kathy (Terry) Nierengarten of Sheffield, sister-in-law Janet (Lance) Larson of Sheffield, and many aunts, uncles, nieces and nephews. He was preceded in death by his maternal grandparents William and Lena Esser and paternal grandparents Antone and Grace Larson and father-in-law Edward Smit. In lieu of flowers memorial may be directed to the family for future disbursement. Burial will take place at the Hillside Cemetery in Sheffield, Iowa

The family of Rick E. Larson created this Life Tributes page to make it easy to share your memories.

Send flowers to the Larson family.