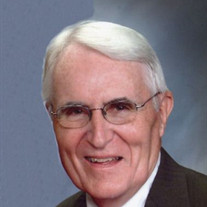 Roger Vincent Doughan Roger Doughan passed Sunday afternoon at his home in Hampton, Iowa. Born May 11, 1935, in Algona, Iowa, of parents Vincent and Margaret (Lawler) Doughan, Roger attended Wesley High School in Wesley, Iowa, and Loras College in Dubuque, Iowa. Roger and Elizabeth Becker were united in marriage on August 2, 1955, in Wesley, Iowa, and recently celebrated 57 years of marriage. Beginning his banking career at First National Bank in Clarion, Iowa, over fifty years ago, Roger and Elizabeth moved to Hampton, Iowa, in 1971 where he worked at First National Bank. He rose to be President and Chairman of the Board. Always active in the community, Roger served as a member of many groups, most recently as leader of the Rolling Prairie Trail project in Franklin County. He was an active member of the Iowa Independent Bankers Association. Roger was an active member of the St. Patrick's Catholic Church in Hampton. Roger is survived by his wife, Betty, of Hampton, Iowa, as well as son Tom of Gaylord, Minnesota, daughter Sue and husband Brian Lubben of Minnetonka, Minnesota, daughter Anne and husband Scott Swain of Tallahassee, Florida, and daughter Nancy and husband Joe Jansen of Victoria, Minnesota. Roger and Betty have five grandchildren, Becker and Emma Lubben, Shelby Swain, and Liz and Allie Jansen. Roger was preceded in death by his parents, brother Steve Doughan, and sister Nancy Ballard. Roger greatly enjoyed annual family vacations to a cabin in northern Minnesota as well as trips to DisneyWorld and Ireland. Roger and Betty were inseparable and enjoyed regular visits to Arizona and Door County, Wisconsin. He was proud of his Irish heritage and his favorite color was green. He will be greatly missed by his family, friends, and community. Erin go Bragh! Burial will be in the Hampton Cemetery in Hampton, Iowa In Lieu of flowers memorial may be directed to the family.

The family of Roger V. Doughan created this Life Tributes page to make it easy to share your memories.

Send flowers to the Doughan family.