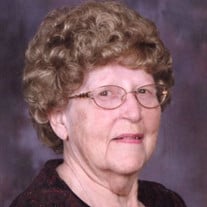 Ruth Emily Elphic, 86, of Hampton, Iowa, passed away on Tuesday, October 29, 2013, at the Rehabilitation Center of Hampton in Hampton, Iowa. She was born on April 10, 1927, in Mason City, Iowa, the daughter of Robert E. and Rachel B. (Booth) Donaghy. Ruth graduated from Mason City High School. She was united in marriage to Clair Elphic on August 5, 1945, in Mason City. Ruth was a homemaker and farm wife for forty years. She also owned Elphic Upholstery with Clair and did various secretarial jobs. Ruth enjoyed fishing in Minnesota and Canada and traveling the western states in her younger years and crocheting afghans and doilies. She was an excellent cook and baker and enjoyed entertaining. Ruth was a previous member of the United Church of Christ in Mason City and had been attending services regularly at the Faith Baptist Church in Hampton. She was also a 4-H leader for many years and was a member of the Franklin General Hospital Auxiliary. Ruth is survived by her daughter Julie (Darwin) Pralle of Latimer and their children Clayton Crawford of Latimer, Courtney (Jake) Hansen of Latimer, Travis Pralle (Lindsey Christensen) of Latimer and Whitney Pralle of Latimer; daughter Margo (Doug) Steding of Iowa Falls and their children Bridget Steding of Farmington, Minnesota and Joe (Martha) Steding of Eldora; son Eugene (Jane) Elphic of Hampton and their children Hope McVay of Osceola, Shawn (Rachelle) Elphic of Latimer, Blair (Lacey) Elphic of Latimer and Corey (Teresa) Campbell of Coulter; along with seventeen great-grandchildren. She was preceded in death by her parents, baby brother, grandson Brock Crawford, granddaughter Kelli Perkins and great-grandson Keith McVay. Memorial services will be held at 1:30 p.m., Saturday, November 2, 2013, at Faith Baptist Church in Hampton, with Pastor David Koenigsberg officiating. There will be no visitation held. Burial will be held at a later date.

Ruth Emily Elphic, 86, of Hampton, Iowa, passed away on Tuesday, October 29, 2013, at the Rehabilitation Center of Hampton in Hampton, Iowa. She was born on April 10, 1927, in Mason City, Iowa, the daughter of Robert E. and Rachel B. (Booth)... View Obituary & Service Information

The family of Ruth Emily Elphic created this Life Tributes page to make it easy to share your memories.

Ruth Emily Elphic, 86, of Hampton, Iowa, passed away on Tuesday,...

Send flowers to the Elphic family.