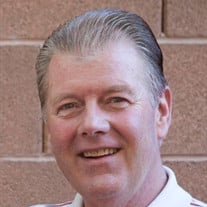 Seth Morton, 55, passed away Friday, January 17, 2014, peacefully at his home in Clear Lake, Iowa with his daughter and loved ones by his side. He was born July 10, 1958, in Hampton, Iowa to Edward Jr. "Mort" and Emma Jeane (Campbell) Morton. A large family consisting of 8 children, he was the 5th born and was raised in Coulter, Iowa along with his siblings, parents and grandparents. He attended the Nazareth Lutheran Church and graduated from CAL Community High School in Latimer, Iowa in 1976. Upon graduation, he joined his Father and brothers in the family business known as Mort's Pump and Plumbing Co., in Coulter, Iowa which later expanded and transitioned to Latimer, Iowa. In May of 1981 he married Naomi (Connour) Wilson of Hampton, IA and was the step-father to two wonderful sons, James and Jeremy Wilson and later blessed with a beautiful daughter, Crystal Morton. In 1999, Seth continued the family business under new ownership, named Mort's Inc. With the guidance of his Father (Mort) and help of several brothers and sister, Seth felt it was important to continue on the legacy along with his family. He was a member of the IWWA (Iowa Water Well Association), IOWWA (Iowa Onsite Wastewater Association), CIOWTS (Certified Installer of Onsite Wastewater Treatment Systems, attained a Master Plumbing License, was a Quality Water Specialist for Water Right Sanitizer Units, and supported The Pheasants Forever Club. He was a member of the Neighborhood Bible Church of Hampton, Iowa and was baptized on December 29, 2013. He contributed to his community as well as to its accomplishments, such as the reformation of the Coulter Cemetery with his donation of pine trees, time, labor, and machinery for clean-up and plantings. He felt it was an important gift he could give back to his community. His compassion for people, his hometown and his family always remained with him deep in heart. He loved to entertain family and friends with summer grill outs and social gatherings. His interests included coaching the Coulter Yankees, Playing Men's League Softball, Deep Sea fishing off Key West, FL., Motorcycling, Camping and attending the Iowa State Fair where he made many friends each year. Seth was a mentor as well as a friend to many. Seth always radiated such an up-beat personality with a smile to make ones day a little brighter. Like his Father, he knew many and all. Those that knew him never forgot his generous smile and bubbly personality along with that energetic voice that would always call you out by name. He was a natural when it came to business and servicing his customers as his motto would always be, "the customer comes first". That very motto is what has kept him number one in a "number two" business today. He not only gave of himself unselfishly to his family, business, and community, but also to numerous others whom reached out for support. He was a devoted father and grandpa to his daughter and his grandson, a dedicated and hard-working business owner, an anchor to his family and an inspiration to many. Seth was a kind-hearted man and will be missed greatly by many that knew of him. He is survived by his daughter Crystal Morton (Renato Bezerra) and grandson Channing of Las Vegas, NV, step sons James (Denise) Wilson and family of Las Vegas, NV and Jeremy (Kim) Wilson and family of Charles City, his brothers Kent (Chris) Morton of Latimer, Robert (Jan) Morton of Iowa Falls, Reginald (Jane) Morton of Hampton, Jason Morton of Coulter, Tracy Morton (Norma Allen) of Coulter, and sister Priscilla Eddy. He is also survived by his Uncles Sanford (Carol) Morton of Coulter, Mac Guldberg of Coulter, Herb Wheeler of Iowa Falls, and Aunts Dixie (David) Jurgens of Marion, Emelia Tate of Illinois, many nieces and nephews, and great nieces and nephews. Seth was preceded in death by his maternal and paternal grandparents, mother and father Mr. and Mrs. EJ "Mort" Morton, aunts and uncles, brother Lance Morton, and brother-in-law Joel Eddy. In Lieu of Flowers memorial may be directed to the family at P.O. Box 403, Hampton, Iowa 50441.

Seth Morton, 55, passed away Friday, January 17, 2014, peacefully at his home in Clear Lake, Iowa with his daughter and loved ones by his side. He was born July 10, 1958, in Hampton, Iowa to Edward Jr. "Mort" and Emma Jeane (Campbell) Morton.... View Obituary & Service Information

The family of Seth W. Morton created this Life Tributes page to make it easy to share your memories.