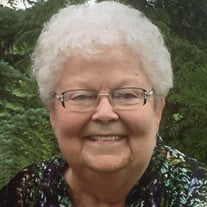 Sharon Kay (Eisentrager) Eilers, 77, of Hampton, Iowa, passed away Sunday, October 1, 2017, at Mercy Medical Center - North Iowa in Mason City, Iowa. She was born December 24, 1939, to Frank and Lela (Truax) Eisentrager at the Eisentrager family farm south of Dumont, Iowa. Sharon lived on the farm all her childhood and youth years before moving to Hampton, Iowa, with her parents who had retired from the family farm in 1957. She attended the Dumont area schools. Sharon was united in marriage to the love of her life, Nathan L. Eilers, on June 2, 1962 at the Salem Evangelical United Brethren Church in Dumont, Iowa, by Rev. Lynn King. They spent their entire married life living in Hampton. Sharon loved her family and enjoyed being with them whenever she could. She loved cooking and baking for all her family and friends. During Sharon's life, she was a homemaker, Avon representative, a clerk at the B & W Grocery Store, and managed the Hallmark Shop. In her later years, she was a daycare provider in their home for 19 years before retirement on December 31, 2004. Daycare children played a big part in her life and she enjoyed watching them grow into adults. Sharon enjoyed meeting new friends and helping them when she could. She enjoyed their pet dogs, Snookie, Peanuts, Precious and Ki Ki. Sharon was a member of the First Congregational United Church of Christ. She served on many committees, sang in the choir in her early years and taught Sunday school. She was a member of the Women's Fellowship and loved being with the people. Sharon was a member of the Tender Loving Care Mother's Club, Red Hat Ladies, the Senior Center, Hospital Auxiliary and worked as a volunteer. She collected Precious Moments. Sharon is survived by her husband Nathan L. Eilers of Hampton; son Kevin (Cheryl) Eilers of St. Cloud, Minnesota, daughter Susan (Randy) Klein of St. Michael, Minnesota; seven granddaughters Carlie, Bailey and Ciara Eilers of St. Cloud, Minnesota, Brittney, Amber, Morgan and Alexis Klein of St. Michael, Minnesota; brother Richard (Esther) Eisentrager of Dumont, Iowa; brother-in-law Leroy Cassmann of Hampton; former daughter-in-law Joan Braaten of St. Joseph, Minnesota; many nieces and nephews and great nieces and great nephews. She was preceded in death by her parents Frank and Lela Eisentrager; brothers Earl and Dale Eisentrager; stepbrother Glenn Eisentrager; sisters Lucille Cassmann, Dorothy Bruns, Phyllis Harms and Beverly Folken; brothers-in-law Lowell Bruns, Henry Folken and Harold Harms; sisters-in-law Mildred Eisentrager and Mary Ann Eisentrager; parents-in-law Pete and Minnie Eilers; brother and sister-in-law Vernon and Betty Happel. In lieu of flowers, memorials may be directed to First Congregational United Church of Christ, ASPCA (American Society for the Prevention of Cruelty to Animals), and Hampton Senior Center. Sharon will be remembered by her friendliness and meeting new people.

The family of Sharon Kay Eilers created this Life Tributes page to make it easy to share your memories.

Send flowers to the Eilers family.