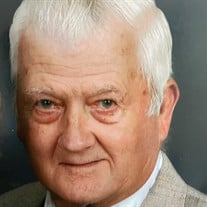 Sherman Aldinger, 87, of Ackley, passed away Tuesday, February 15, 2022 at MercyOne Des Moines Medical Center. Funeral services will be 2:00 PM Saturday, February 19, 2022 at the St. John's United Church of Christ in Ackley. He will be laid to rest with military honors at the St. Peter's Cemetery, rural Geneva. Visitation will be from 1:00 PM until service time on Saturday at the church. Counsell Woodley Funeral Home of Iowa Falls is caring for Sherman and his family. Those planning an expression of sympathy may wish to consider memorials to the family. Sherman Aldinger was born August 21, 1934 to Herman and Ella (Kaster) Aldinger. He attended country school for the first few years in Grant Township in Franklin County. He graduated from Ackley Community Schools in 1955. While in his younger years he could be found roller skating at the local rinks. After high school he served in the US Army from 1956-1958. On April 14, 1966 Sherman was united in marriage to Doris Pearce at the First United Methodist Church in Iowa Falls, Iowa. They moved to the family farm where they raised their three children and farmed. He worked at Iowa Limestone and United Hydraulics. For many years he owned and operated his semi, delivering soybean meal, grain and new farm equipment. When he retired from trucking in 2015, his morning routine was going for coffee at the local grain elevator or Eichmeier Motors. Sherman never met a stranger, especially when talking about farming, roller skating or driving semi. Sherman Aldinger is survived by his wife, Doris Aldinger of Ackley; son, Duane Aldinger (special friend Toni Caselton) of Iowa Falls, daughter, Sheryl Smiley (Van) of Central City and son, Brian Aldinger (Norma) of Holly Springs and seven grandchildren: Matthew Aldinger, Lucas Smiley, Kendra Smiley, Megan Smiley, Amy Aldinger, Kayla Aldinger and Wyatt Aldinger. He was preceded in death by his parents; a brother, Hermann Aldinger, Jr. and father and mother in-law, Clifford and Tillie Pearce.

Sherman Aldinger, 87, of Ackley, passed away Tuesday, February 15, 2022 at MercyOne Des Moines Medical Center. Funeral services will be 2:00 PM Saturday, February 19, 2022 at the St. John's United Church of Christ in Ackley. He will be laid... View Obituary & Service Information

The family of Sherman Aldinger created this Life Tributes page to make it easy to share your memories.

Send flowers to the Aldinger family.