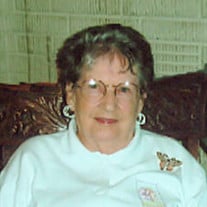 Shirley May (McCombs) Hawver, 85, of Hampton, Iowa, passed away August 16, 2010, at the Franklin General Hospital Nursing Facility in Hampton, Iowa. She was born on May 29, 1925, in Rock Falls, Illinois, to David and Flora (LaMont) McCombs. Shirley was united in marriage to Donald Ray Hawver on February 28, 1946, in Rock Falls, Illinois. Shirley had many interest in her life including crocheting, reading, writing poetry, history, and politics - she was a proud Democrat; but her strongest commitment was to her faith and family. Shirley was an Elder Emeritus at the First Christian Church in Hampton. She dedicated her life to the helping of others by providing a safe haven in her home for battered women and children, being a strong advocate for the elderly and under privileged, and volunteering many hours of tutoring through the Adult Literacy Program. She was recognized for her contributions to others by receiving the Governor's Volunteer Award in 1992. Shirley lived by example and instilled in her children and grandchildren to "Do no great things, only small things with great love." (Mother Teresa) Shirley is survived by her daughter Doris (Ron) West of Hampton, daughter Kathy (Jerrold) Johnson of Aredale, daughter Sallie (Darwin) Taylor of Cedar Rapids, son Monte (Mary) Hawver of Kodiak, Alaska, son David (Teresa) Hawver of Hampton, and daughter Autumn Hawver-Colglazier of Latimer; grandchildren Donna, Lora, Tom, Pete, Thad, Brandy, Courtney, Paul, Sarah, Brandon, Christa, Burke, and Logan; 19 Great-Grandchildren and two Great-Great Grandchildren. She was preceded in death by her parents, husband Donald, infant son Donald, grandson Daren Taylor, son-in-law David Colglazier, sisters Josephine, Zula, Violet, Joy and brothers John, David, and Robert. Shirley's last great contribution to others was deeding her body to the University of Iowa for medical and Alzhiemers research. The family has requested no flowers but memorials may be given in Shirley's name to the Alzhiemers Association or Hospice of North Iowa.

Shirley May (McCombs) Hawver, 85, of Hampton, Iowa, passed away August 16, 2010, at the Franklin General Hospital Nursing Facility in Hampton, Iowa. She was born on May 29, 1925, in Rock Falls, Illinois, to David and Flora (LaMont) McCombs.... View Obituary & Service Information

The family of Shirley May Hawver created this Life Tributes page to make it easy to share your memories.

Send flowers to the May Hawver family.