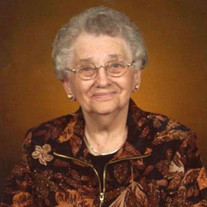 Shirley (Reinke) Plagge of Latimer, Iowa, passed away Friday, August 2, 2013. She was 90 years old and living at the Franklin Country View Nursing Facility in Hampton. Shirley was born on January 21, 1923, the third daughter of Lydia (Weber) and Herbert Reinke in Geneva, Iowa. Shirley always described her childhood as wonderful, full of family love and time to dream. Many of the happiest memories were shared with her sister Ruth. Though she grew up during the Depression, Shirley felt her life was rich and "the best of times". Shirley attended Geneva Schools, graduating with a life-long love of learning and friendships. Throughout life, Shirley valued world awareness and thoroughly enjoyed discussions on vast topics supported by her voracious reading. Following a courtship that commenced with a blind date, Shirley was united in marriage to LaVern Plagge on November 10, 1941, in Geneva, Iowa. World War II impacted farming plans and instead guided them to early homes near army bases in Kansas and Washington, the first of their many travels, both domestic and international. To this union two children, a son, Jerry, and a daughter, Joyce, were born. Shirley appreciated her farm life in rural Latimer; a life filled with the cycles of growing and adventures both great and small. Shirley always took pride in her role as a homemaker and was an award-winning baker, most noted for rolls. Her expansive flower gardens stopped traffic and enriched her home, while fresh garden produce contributed to amazing meals for family and friends. Shirley thrived wherever "planted", especially in the home she and Lavern created within Latimer where grandchildren loved the combination of farm adventures as well as the beautiful park next door that they considered their world. Most valued in Shirley's life were always the family, the church, and her wide community of friends. Her early years at the Geneva Methodist Church as well as her life at Immanuel United Church of Christ in Latimer nourished her legacy of service and her strong Christian commitment. As a dedicated member of Immanuel, she assumed a litany of leadership, teaching, and involvement roles. She will always be remembered for her devotion to family, reveling in family fun and special events. Memories reflect her zest for living, the happiness of her laughter, her friendship offered to all, and her dedication to making the world better for others. Shirley was a woman of strong faith, a vibrant example of care, compassion and social action. Her dedication to helping others is displayed in the many organizations benefitting from her focus and volunteer commitments, especially CAL Community Schools, CAL Over 60's, Immanuel UCC, Latimer Park Society and others . Her memory is to be honored through memorials to the organizations she greatly valued. Among those cherishing her memory are: her children Jerry and Jeanne Plagge, Joyce and Donald Benes; her grandchildren: Scott (Julie) Plagge, Troy (Carol) Plagge, Gabrielle Sandberg, York (fiancÃ© Elizabeth) Plagge, Kent (Jessica) Benes and Kyle Benes; her great grandchildren: Brandon, Bryan, Jordan, Amanda, Ryley, Paige, Kaia and Lucas; four great great granddaughters; sisters-in-law Evonne Plagge, Lorena Koch, Elaine Reinke, along with many wonderful nieces, nephews, cousins, and friends whom she so valued. She was preceded in death by her parents, husband LaVern, sisters Ruth and Marlys, parents-in-law Louise and Louis Plagge, infant granddaughter Dawn Ranae, brothers-in-law Herbert Plagge, Wayne Plagge, Don Koch, Don Reinke, and sister-in-law Margaret Plagge. A Celebration of Life will be held at 11:00 a.m., Saturday, August 10, 2013, at the Immanuel United Church of Christ in Latimer, with Pastor Lindsey Braun officiating. Visitation will be held from 4:30 p.m. to 7:00 p.m., Friday, August 9, 2013, at the Immanuel United Church of Christ in Latimer. Graveside services will be held at 10:00 a.m., prior to the service on Saturday, August 10, 2013, at the Marion Center Cemetery in rural Latimer. A caravan will depart Immanuel UCC at 9:45 a.m. for the internment. The Sietsema Vogel Funeral Home of Latimer is handling the arrangements.

Shirley (Reinke) Plagge of Latimer, Iowa, passed away Friday, August 2, 2013. She was 90 years old and living at the Franklin Country View Nursing Facility in Hampton. Shirley was born on January 21, 1923, the third daughter of Lydia (Weber)... View Obituary & Service Information

The family of Shirley Plagge created this Life Tributes page to make it easy to share your memories.