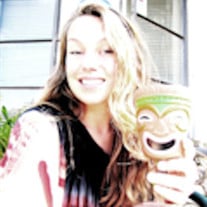 Stacey Marie Hernandez, 18, of Aredale, Iowa, passed away September 16, 2010, at the Mercy Medical Center North Iowa in Mason City, Iowa due to injuries sustained in an automobile accident. She was born July 26, 1992, in Santa Cruz, California,... View Obituary & Service Information

The family of Stacey Hernandez created this Life Tributes page to make it easy to share your memories.

Send flowers to the Hernandez family.