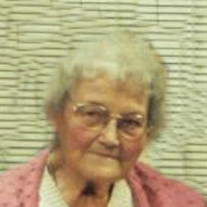 On Sunday, February 12, 2012, Susie Block Voigts, age 91, heard the Savior say, "Today you will be with me in paradise." She was born December 12, 1920, to Henry and Bena (Hovenga) Block, on a farm near Hansell, Iowa. She was the eldest of three daughters, Elizabeth (Warner Sluiter) was 2 Â½ years younger and Martha (Stan Kutin) was 10 years younger. At age five, the family moved to Butler County near Dumont. Susie attended East Clutterville Country School until she graduated from the eighth grade. This was the same school that her mother and eleven siblings had attended. She graduated from Dumont High School in 1937 as Valedictorian of her 17 member class. She attended Iowa State Teacher's College and taught country school for 7 Â½ years, both before and after her marriage to Merlyn Voigts on May 25, 1945. She went back to teaching as a substitute teacher in the Allison-Bristow system after her youngest child was in 6th grade. Susie and Merlyn farmed in the Vilmar (Greene) community. Together they raised four children, Susanne (Steve) Cooper of Osage, Bruce (Joan) Voigts of Clarion, Brenda (Dennis) Schmadeke of Cedar Falls, and Kevin (Kate) Voigts of Kabul, Afghanistan. Merlyn passed away in November of 1977. Susie was confirmed as an adult at St. John's Lutheran Church, Vilmar. There she taught Bible School, Confirmation Bible History, and adult Sunday School. She served as president of the Woman's organization and her circle. She also served as the first woman president of the Vilmar congregation and delivered the Pentecost sermon one year in the pastor's absence. She participated in a small group Bible study for over 30 years. As the wife of a Navy veteran , she was active in the Amvets Auxiliary of Allison, Iowa. Following Merlyn's death, she worked as Activity Director for the Greene Nursing Home. In 2001, due to crippling Rheumatoid arthritis, she moved to Osage, Iowa to live with her daughter and son-in-law. She remained there until last month when she entered Bartels Retirement Home in Waverly. Writing was one of her many passions, and she enjoyed contributing letters to the opinion page in various newspapers and magazines. She joined the Osage Alpha Writers group, and her poems were included in "Lyrical Iowa" the last 4 years. At age 90, she completed a book telling her grandmother's immigration story. Her hobbies included doing the daily crossword puzzle and cryptogram and crocheting rag rugs. Susie is survived by her four children and their spouses, ten grandchildren, Carrie (Michael) Stadtmueller, Andy (Katie) Cooper, Marty (Melissa) Cooper, Stephanie (Dean) Baskett, Julie Voigts, Nicole (Chris) Hunter, Brooke (Thomas) Holmes, Libby Schmadeke, Matthew Voigts, and Michelle Voigts, and seven great-grandchildren, Gabriel and Jonah Stadtmueller, Madalyn Cooper, Lily Hunter, and Kelly, Christina, and Jaxson Baskett. She is also survived by her in-laws, Leroy and Darlene Voigts. She was preceded in death by her parents, her husband, her two sisters and their husbands, and in-laws, Kenneth and Caryl Voigts and Rick and Evelyn Menken. Burial will be in St. John's EV Lutheran Church Cemetery.

On Sunday, February 12, 2012, Susie Block Voigts, age 91, heard the Savior say, "Today you will be with me in paradise." She was born December 12, 1920, to Henry and Bena (Hovenga) Block, on a farm near Hansell, Iowa. She was the eldest of... View Obituary & Service Information

The family of Susie nmn Voigts created this Life Tributes page to make it easy to share your memories.

Send flowers to the Voigts family.