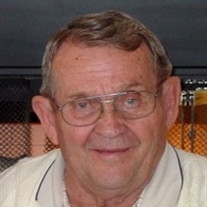 Sylvester L. Pease, 86, of Hampton, Iowa, formally of Rolfe, Iowa passed away at his home Monday, August 26, 2013. He was born December 22, 1926, on a farm in rural Bradgate, Iowa, to Loren L. and Fern Mary (Lynch) Pease. He was married on September 9, 1951, in Rolfe, Iowa, to Ethel Louise Young. Sylvester worked as a farmer. As a youth he was President of his 4-H club, he enjoyed showing registered Angus cattle. In the early years of their marriage Sylvester and Ethel were members of the Rolfe Saddle Club and enjoyed horse riding together. Sylvester enjoyed buying and selling cars and trucks. He and Ethel enjoyed 23 years wintering in Arizona. He especially enjoyed visits from his grandchildren and great grandchildren. He was a member of the Hampton United Methodist Church in Hampton. He was also a member of the Hampton Senior Center, where he served on the board. He loved spending time with his many good friends at the Senior Center and had fun playing cards with them. He is survived by his daughter Rosemary (David) Koenigsberg of Hampton, son Loren (Michelle) Pease of Trabuco Canyon, California, grandchildren Aaron (Ariel) Koenigsberg, of Billings, Montana presently residing in Thailand, Peter (Keri) Koenigsberg of Burwell, Nebraska, Nathan Koenigsberg of Hampton, Sheena Pease of West Bend, Michaela Pease of Dubuque, Hallie and Hannah Pease of Trabuco Canyon, California, great grandchildren Colby, Josiah and Aiva Koenigsberg of Burwell, Nebraska, and Jonah Koenigsberg of Billings, Montana presently residing with his parents in Thailand. Sylvester was preceded in death by his parents and his wife. Burial will take place at the Clinton Garfield Cemetery in Rolfe, Iowa. In lieu of flowers memorial may be made to the Hampton Senior Center in Hampton,Iowa

The family of Sylvester L. Pease created this Life Tributes page to make it easy to share your memories.

Send flowers to the Pease family.