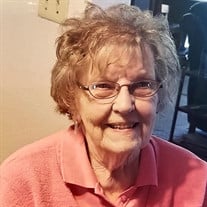 Thelma Willems, 96, of Ackley, passed away Wednesday, March 16, 2022 at Grand JiVante in Ackley. Funeral services will be 2:00 PM Tuesday, March 22, 2022 at the St. John’s United Church of Christ in Ackley. She will be laid to rest at the Oakwood Cemetery in Ackley. Visitation will be from 1:00 PM until service time on Tuesday at the church. Counsell Woodley Funeral Home of Iowa Falls is caring for Thelma and her family. Thelma Mae Willems was born on October 10, 1925 to Bryan and Anna (Kadous) Huisman in Wellsburg, Iowa. She graduated from Wellsburg High School class of 1943. After graduation Thelma worked in the war factories and later at various businesses in Wellsburg. On March 11, 1949 Thelma was united in marriage to Robert Willems at the Wellsburg Reformed Church. She was a member of St. John’s United Church of Christ. Thelma worked as a nurse aide for the Presbyterian Village of Ackley, Iowa for 26 years. Thelma enjoyed Ackley Sauerkraut Day picnics, family get-togethers and working outdoors in her beautiful flower gardens. She liked to sew, embroidery and was and excellent seamstress. She made a lot of her daughter’s clothes and doll clothes for her granddaughters. Thelma was an avid Iowa Hawkeyes fan and enjoyed watching her grandchildren in all activities. She was well loved by her family and friends. Thelma Willems is survived by her daughters, Joyce Roegner and Jolene (Bill) Ibeling of Ackley, Iowa; ten grandchildren; twenty-four great grandchildren; a sister, Bonnie (Ed) Christians of Wellsburg, Iowa; daughters in-law, Linda Willems of Fort Worth, Texas and Teresa Willems of Ackley, Iowa and brother in-law, Dick Pugh of Alden, Iowa. She was preceded in death by her husband, Robert Willems; parents, Bryan and Anna Huisman; one infant brother, three sisters: Esther, Dorothy and Beverly; two sons, Stephen and Gary Willems and son in-law, Randy Roegner.

The family of Thelma Willems created this Life Tributes page to make it easy to share your memories.

Send flowers to the Willems family.