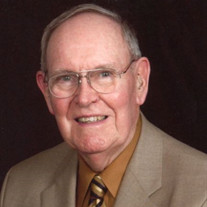 Thomas Ladd Pitts II, 86, of Hampton, Iowa passed away Oct. 21, 2012 at the Franklin General Hospital Nursing Facility in Hampton, Iowa. He was born on February 19, 1926 to Thomas Ladd Pitts and Mabel Irene Potts Pitts. His parents were living in Louisville, Kentucky where his dad worked for Belknap hardware. Shortly after his birth they moved to Madison, Alabama, his mother's home town. His father managed a plantation that is now part of Redstone Arsenal in Huntsville, Alabama. Tom attended school in Madison, Alabama and graduated as Valedictorian in 1944. He worked for two years to earn college money. He enrolled at Alabama Polytechnical Institute now called Auburn University. He was Business Manager for the ag college magazine. He was a member of Sigma Phi Epsilon Fraternity. The summer between his junior and senior year he was asked by the county agent if he would like to take some local boys to Hillsboro, Ohio. They would work with Dr. Marion Myers, a retired plant genetics professor from Ohio State University. Dr. Myers was developing new varieties of hybrid corn. When summer ended Dr. Myers asked Tom if he would like to stay and join him. Tom's school money was running low and he decided to stay. Tom called on ag colleges from Salt Lake City to the east coast, selling them his newly developed varieties. Tom met Susan Jane Roush, a local school teacher, in Hillsboro, Ohio. They were married on September 23, 1951 at Jane's parents home by Rev. Paul Jones. In 1952 Dr. Myers sold his business and Tom and Jane moved to Tipton, Indiana. Tom was sales manager for Cribfiller Hybrids at Windfall, Indiana. While at this location Tom was drafted into the army signal corps in 1954. He was stationed in Fort Leonard Wood, Missouri, Fort Monmouth, New Jersey and Fort Bliss, Texas. He was an instructor in the Radar School. Jane taught school in these locations. In 1956 when he was discharged from the army, they moved to Piper City, Illinois where he was assistant manager of Producers Seed Co. In 1969 they came to Hampton, Iowa to join Farmers Hybrid. After Farmers Hybrid was sold to Monsanto, Tom joined Joe Pitsor and they formed North Central Reality. In 1973 Joe Pitsor formed his Farm Management Business, Tom and Jane started Tom Pitts Realty and worked there until they retired. Wherever they lived they always took an active part in the community. The Methodist Church was important to them. Tom's last job was chair of the Iowa United Methodist Foundation. He was a 50 year member of Rotary and a Paul Harris Fellow. He was a 50 year member of the Masonic Lodge. Tom was a member of Forum, Hampton Housing Board and Hampton Development. He was President of the Hampton Chamber when RAGBRAI made their first ride through Hampton. Tom worked hard to get the Convention Center and to get the old hospital rehabbed for senior housing. He especially enjoyed being a football sideliner for Hampton High School until his hearing failed. He loved his family, especially his grandsons. When life was getting tough they could lift his spirits with some of their art work in the mail or a visit on the phone. Tom is survived by his wife Jane, beloved daughter Jennifer Jane and her husband Todd Hutchison and grandsons Thomas Alden and Owen Todd of Grosse Pointe Park, Michigan. Burial will take place at the Hampton Cemetery in Hampton, Iowa Memorials may be given to the Hampton United Methodist Church or the Franklin County Fair.

The family of Thomas Ladd Pitts created this Life Tributes page to make it easy to share your memories.

Send flowers to the Pitts family.