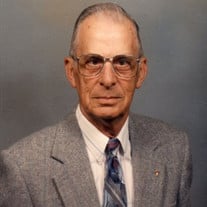 Vincent L. Kolb, 96, formerly of Latimer, passed away Tuesday, November 1, 2016, at the Sheffield Care Center in Sheffield, Iowa. Vincent was born December 20, 1919, on the family farm between Thornton and Meservey. He was the son of the late John and Emma (Peterson) Kolb. Vincent was a lifelong member of St. Paul's Lutheran Church in Latimer. Vincent attended the Latimer Public school. He served in the US Army during World War II. As a young boy, he started working at his dad's hardware store in Latimer. After he graduated from school, he and his brother, Kenneth, took over the business. Kenneth went on to run the Thornton hardware store with another brother, Darrell. Brother, Harlyn, decided to not go into the hardware business. Vincent continued to own and operate Kolb Hardware until his retirement. In 1968, he married Florice Pueschel of Rudd. Vincent and Florice loved going to Arizona in the winter and seeing old friends. They both enjoyed dancing and playing bingo. Vincent loved nature, especially birds. His backyard had numerous feeders and birdhouses in it. There were special trees and bushes that provided for the birds year round. He was fond of cardinals, bluebirds, and purple martins. Those left to cherish his memory include his wife, Florice, son, Douglas (Mary Lin) Kolb of Mason City, daughter, Patricia (Michael) Ward of Hampton, brother Harlan (Marilyn) Kolb of Charles City, grandchildren, Lori Ward and Christina (Michael) Hatfield, and great-grandchildren, Brianna and Thomas Hatfield. Vincent was preceded in death by his parents, brothers Kenneth and Darrell, and grandson Jeff Bolstad. In lieu of flowers, memorials may be directed to the Lime Creek Nature Center in Mason City, Iowa.

Vincent L. Kolb, 96, formerly of Latimer, passed away Tuesday, November 1, 2016, at the Sheffield Care Center in Sheffield, Iowa. Vincent was born December 20, 1919, on the family farm between Thornton and Meservey. He was the son of the late... View Obituary & Service Information

The family of Vincent L. Kolb created this Life Tributes page to make it easy to share your memories.

Send flowers to the Kolb family.