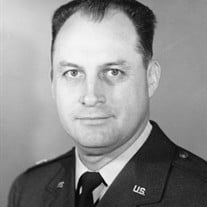 Lt Col Virgil I. Lunning (USAF, ret) of Hampton, IA, born Jan. 14, 1921, in Brycelyn, MN, died Memorial Day, May 28, 2012, at the age of 91, at the Rehabilitation Center of Hampton in Hampton, IA. He was the son of Harry E. and Lyda, nee Vekre, Lunning. In his early life, he was raised on a farm and spoke Norwegian until he began attending public school. He was very proud of his Norwegian heritage. He graduated from Mason City High School and worked for the Chicago, Milwaukee, St Paul, and Pacific Railroad until he entered the military service. Colonel Lunning was a Command Pilot and veteran of three wars. He was a combat pilot in World War II and the Korea Conflict, flying the C-47 Skytrain and the C-119 Boxcar, respectfully. He was in the first class that checked out in the C-130 Hercules and developed and implemented the C-130 flight training program for the Air Force. He also developed and authored the worldwide command and control system used by the Air Force for over 50 years. He served with distinction during the Viet Nam War as an Air Force officer assigned as an operative with the Central Intelligence Agency. In this capacity, he set up and operated a clandestine airline transportation system that supported covert activities of the CIA. Colonel Lunning retired from the United States Air Force after 22 years service. After retiring from the Air Force, Colonel Lunning maintained his interest in aviation. In 1966, he purchased his own Cessna 182 Skylane and for the next 30 years he and his wife traversed the United States from coast to coast. He was also an avid recreational vehicle owner who traveled all of the continental 48 states and Canada. One of his favorite pastimes was fishing for walleye and Northern Pike in Minnesota and Canada. He always said, "The only thing better than catching fish was eating them." Colonel Lunning was an expert wood refinisher and there are many residents of Iowa who still marvel at his restoration of their treasured antiques. He served as mayor of the City of Hampton in the late 60s. His significant accomplishments as mayor included the acquisition of the property for the Hampton Industrial Park, brought seven new businesses to Hampton creating jobs and opportunity, and worked with the federal and state governments to begin construction of the Hampton Municipal Airport. He was also instrumental in bringing the Franklin General Hospital to Hampton. Colonel Lunning was a life member of the Air Force Association, Military Officers Association of America, a member of the American Legion Post 183 of Hampton, and a past member of the Sons of Norway. He was preceded in death by his parents and a brother Elwin I. (Al) Lunning. Surviving are his wife of 71 years, Virginia M., nee Foughty, Lunning, whom he married June 13, 1941, at the Congregational Church Parsonage, Hampton, IA; two sons, Lt Col (USAF, ret) David C. (Carol) Lunning, O'Fallon, IL; Robert B. (Nancy) Lunning, St. Paul, MN; grandchildren, David C.(Angi) Lunning, Jr., Deborah S.(David) English, Chance P. Lunning; great grandchildren, Tyler and Connor Lunning, Taylor and Brenna English; sisters LaVonne Baker and Ruthyvonne Peck, Mason City, IA, and Harriette Casey, Broken Arrow, OK, and brother Richard G. (Dick) (Sharon) Lunning, Swaledale, IA; and many nieces and nephews. Memorials may be made to the charity of the donor's choice. Visitation will be at 9:30 a.m., Jun. 4, 2012 at Sietsema-Vogel Funeral Home in Hampton, IA. A memorial service will be conducted on Jun. 4, 2012 at 10:30 a.m. at the funeral home funeral home with Rev. Art Zewart officiating. Interment with full military honors provided by Offutt Air Force Base will be held at 2:00 p.m., Jun. 4, 2012 at the Iowa Veterans Cemetery at Van Meter, west of Des Moines.

The family of Virgil Ivan Lunning created this Life Tributes page to make it easy to share your memories.

Send flowers to the Lunning family.