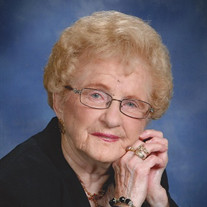 Vivian Elizabeth Buss, 93, of Hampton, Iowa, passed away March 17, 2015, at the Franklin General Hospital in Hampton, Iowa. She was born September 30, 1921, in Thornton, Iowa, to Edward and Dulcie (Hartwig) Coyle. Vivian graduated from Thornton High School in 1940 and briefly attended the nursing program in Mason City, Iowa. She was united in marriage to Gerald R. Buss on December 8, 1946, at the Little Brown Church in Nashua, Iowa. Vivian was a member of the WAC (Women's Army Corp) for one year before being honorably discharged. She worked for 32 years at the Hampton Health Care Center as a CMA, working the overnight shift until she was 86. Vivian was a former member of many church groups, as well as her Mother's club and a hospice volunteer. She was a member of the Hampton United Methodist Church in Hampton, Iowa. Vivian enjoyed flowers, and always had her yard full of them in the warm months. She loved to look her best and loved to go shopping, especially with her granddaughter. She also enjoyed quilting, sewing and her Doberman, Rascal as well, he made her smile until her final days. Above all she loved her family, her boys, her granddaughter and husband, and her four great grandchildren were her pride and joy, and she glowed when any of them were around. Vivian took every opportunity she had to spend time with them. She is survived by her son Gary Buss of Hampton, son Byron Buss of Hampton, son Daryl Buss of Iowa City, granddaughter Hayley (Reyes) Montes of Hampton, great grandchildren Makayla, Collin, Jaxson and Sophia Montes of Hampton, sister Doris Jeffrey of Rockford and sister-in-law Mary Coyle of Clear Lake, and several nieces and nephews and their families. Vivian was preceded in death by her parents, husband, brothers Archie, Don, Jim, Chuck, Stan and Eddie.

The family of Vivian Elizabeth Buss created this Life Tributes page to make it easy to share your memories.