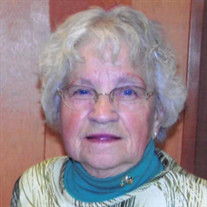 Waltraut "Wally" Tonjes, 91, of Tipton, Iowa, formerly of Hampton, passed away Monday, February 7, 2022, at UnityPoint Health - St. Luke's Hospital in Cedar Rapids. A public visitation will be take place from 10:00 a.m. to 11:00 a.m. Friday, February 11 at the Fry Funeral Home in Tipton. Funeral services will be held immediately following the visitation. A graveside service will be held at 10:30 a.m., Saturday, February 12 in the Hampton Cemetery. Waltraut Ruth Tonjes was born April 9, 1930, in Tilsit, East Prussia to parents Franz and Meta Wagner. She was the oldest of seven children. Wally spent her childhood moving around Germany with her family. Growing up in World War II era Germany was an unimaginable hardship for Wally and her family, but you would never hear a complaint from her. That difficult chapter of her life shaped her into the woman she would become. On the night of her 18th birthday Wally went out to a dance, and while she was there she met the love of her life, Gus Tonjes. The two dated for several years, then Gus moved to America. He told Wally he would either send for her to join him, or come back to Germany to be with her. Gus kept his word, and they were reunited in Mason City, Iowa on April 13, 1955. Less than three months later, on June 5, 1955, they were united in marriage at the Hansell Methodist Church. To this union one child was born, their daughter Judy. Wally graduated high school and attended business school in Germany before moving to America. Once she was in Hampton, she worked several jobs. She worked at the Trading Post grocery store, B & W, Seven Stars Restaurant, and at Hardee's. Wally and Gus made a combined 17 trips back to Germany over the years. They traveled all over the U.S. as well. She enjoyed baking, and always had time for coffee, cake, and visiting with her friends and family. Wally was a caring and loving person, and anyone she met knew it right away. She loved her grandkids, and adored her great-grandson. She will be sorely missed by those lucky enough to know her. To use her own words, she is "going back to be with her sweetheart." She is survived by her daughter, Judy (Rick) Rouse of Tipton, grandchildren, Emilie (Kameron) Hein and their son Maverick of Bennett, Kellie Rouse of Tipton, brother, Reinhardt Wagner of Germany, numerous nieces and nephews, and her sister-in-law, Anita Tonjes of Germany. She was preceded in death by her parents, her husband Gus, four sisters, and a brother. The Counsell Woodley Funeral Home of Hampton is caring for Wally and her family.

The family of Waltraut "Wally" Tonjes created this Life Tributes page to make it easy to share your memories.

Send flowers to the Tonjes family.