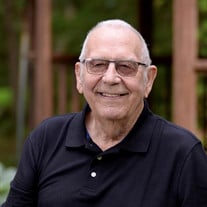 Warren Lindaman, 89, of Wellsburg, passed away Saturday, March 5, 2022 at Grand JiVante in Ackley, due to complications from COVID-19. Memorial services will be 10:30 AM Saturday, March 12, 2022 at the East Friesland Presbyterian Church, 11121 150th St., rural Ackley. He will be laid to rest with military honors at the East Friesland Cemetery. Visitation will be from 3:30-7:30 PM on Friday, March 11 at the church. In lieu of flowers, those planning an expression of sympathy may wish to consider memorials to Care Initiatives Hospice or to the family to be designated to other missions. Counsell Woodley Funeral Home of Iowa Falls is caring for Warren and his family. Warren L. Lindaman was born on January 4, 1933, to Jake J. and Esther (Oelmann) Lindaman at the Marshalltown Community Hospital. (He had the distinction of being Grundy County’s first baby of the year in 1933.) He attended Country School at German #5 through the 8th grade and then finished his education, graduating from Wellsburg High School in 1951. He served his country with the U.S. Army from 1953 to 1955. In the U.S. Army he was a personal assistant for Retired General Cyrus Q. Shelton in El Paso, Texas. After his service in the U.S. Army, he began farming with his father, north of Wellsburg. Warren loved cattle and that passion led him to become a cattle order buyer for other individuals throughout the area. He married Dena Krull on June 16, 1959 at the Bethany Presbyterian Church in Grundy Center. They were blessed with four children, Cindy, Greg, Darla and Barb. Warren was a lifelong member of the East Friesland Presbyterian Church. He served the Lord as an elder, deacon, trustee, Sunday school and Catechism teacher. In addition to his church involvement, he was a 4H Leader, served on the Wellsburg School Board, Wellsburg City Council, Wellsburg Community Club and the Wellsburg American Amvet Post No 91. Warren also served on the Board of Directors for Peoples Savings Bank from 1984 – 2008. Warren was a very generous, humble, caring and loving man. He treasured his faith and family above everything else. Warren never met a stranger and always had a genuine interest in the people he met. One of his greatest joys was attending cattle sales with his son and grandson. In addition, he greatly enjoyed sharing his passion for trout fishing with his family and friends. Above all, he was incredibly proud and actively involved with his grandchildren and great grandchildren. His infectious smile and outgoing personality will be greatly missed by all. Warren Lindaman is survived by his wife of 62 years, Dee Lindaman of Wellsburg; daughter, Cindy (Steve) Corwin of Cedar Falls, son, Greg (Kim) Lindaman of Wellsburg, daughter, Darla (Kent) Nederhoff of Wellsburg and daughter, Barb (Jeff) Curran of Waterloo; grandchildren: Ashley (Travis) Saunders, Morgan Corwin, Maddie (Matt) Byl, Kelsey (Adam) Alpert, Mackenzie (Tyler) Sprain, Zach (Emily) Lindaman, Taylor (Blake) Nederhoff, Shelbi Nederhoff (friend David), Ben (Briony) Curran, Nate (Mirela) Curran and Emily Curran; great grandchildren: Tayah, Presley, Tenley, Wesley, Shayley, Payton, Lou, Jagger, Andie, JoEllin and Riggs as well as his cousin, Joanne Dass who grew up in the Lindaman home. He was preceded in death by his parents, Jake J and Esther Lindaman; a brother, Arnold Lindaman and other extended family members.

Warren Lindaman, 89, of Wellsburg, passed away Saturday, March 5, 2022 at Grand JiVante in Ackley, due to complications from COVID-19. Memorial services will be 10:30 AM Saturday, March 12, 2022 at the East Friesland Presbyterian Church, 11121... View Obituary & Service Information

The family of Warren Lindaman created this Life Tributes page to make it easy to share your memories.

Send flowers to the Lindaman family.