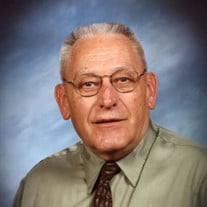 Wendell Henry Miller, 78, of Hampton, Iowa, passed away Saturday, April 20, 2013, at his home in Hampton. He was born on May 19, 1934, in Hampton, Iowa, to Henry and Margaret (Uilk) Miller. Wendell attended rural country schools. He was united in marriage to Jo Ann Mullen on June 17, 1956, in Rockwell, Iowa. Wendell served his country in the United States Army. He owned and operated Miller Tractor Service in Hampton, which he started in 1970 and loved very dearly. Wendell was a member of the Trinity Lutheran Church in Hampton, the Iowa Plowing Association Inc., the Cedar Valley Engine Club and the Antique Tractor Association. He was involved in Boy Scouts with his son for many years. Wendell loved being with his family on a boat in Clear Lake or on vacation. He also enjoyed bowling and golfing. Wendell loved anything and everything relating to tractors. Some of the many things included tractor rides, tractor pulls, plowing competitions, restoring antique tractors, his Massey-Harris tractors and driving tractors and pedal pulls during the Franklin County Fair. He was honored with being the Grand Marshall for the Franklin County Fair in 2003. Wendell is survived by his wife Jo Ann Miller of Hampton, daughter Lori Miller of Farnhamville, daughter Sandra and husband Mark Harrington of Plymouth, daughter Kim Miller of Hampton, son Kurt Miller of Gilbert, Arizona, grandson Kyle Harrington of Plymouth, granddaughter Kayla Harrington of Plymouth, grandson Alex Miller of Gilbert, Arizona, sister Marlis Janssen of Adams, Minnesota, brother Gene and wife Sharon Miller of Latimer, sister-in-law Beulah Curley, along with many nieces and nephews. He was preceded in death by his parents Henry and Margaret, brother Melvin (Dorothy), infant brother, mother-in-law Eugine Mullen, brothers-in-law Robert Curley and Bill Janssen, sister-in-law June Kidgell and niece Jacalyn Hartwigsen. Burial will take place in the Hampton Cemetery.

Wendell Henry Miller, 78, of Hampton, Iowa, passed away Saturday, April 20, 2013, at his home in Hampton. He was born on May 19, 1934, in Hampton, Iowa, to Henry and Margaret (Uilk) Miller. Wendell attended rural country schools. He was united... View Obituary & Service Information

The family of Wendell Henry Miller created this Life Tributes page to make it easy to share your memories.