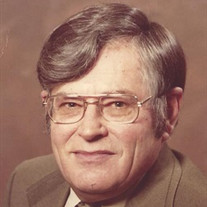 Willard (Bill) David Feltus, 91, of Charles City, died Thursday, May 15, 2014, at the Clarksville Skilled Nursing Center in Clarksville, Iowa. Funeral services will be held at 10:30 a.m., Monday, May 19 at the Sietsema Vogel Funeral Home, 308 Birch Street, Allison, Iowa. Rev. Douglas Tharpe will officiate. Burial will follow at the Allison Cemetery. Visitation will be 4 to 7 p.m., Sunday, May 18 at the Siestema Vogel Funeral Home. Those considering an expression of sympathy may direct memorials to the Cedar Valley Engine Club or the Clarksville Skilled Nursing Center. Bill Feltus was born Feb. 15, 1923 in rural Allison to George E. and Erma R. (Gallagher) Feltus and attended country school. He worked on the family farm, was employed at an Oliver dealership in Allison, and operated a filling station in Marble Rock before he began his employment as a machinist at the Oliver Farm Equipment Company in Charles City, where he retired in 1984. Bill Feltus and Eleanor (Mickey) Roberts were married Jan. 28, 1945 and made their home in Allison, Osage, and Marble Rock. Together, they had two sons and seven daughters. They later divorced. On May 5, 1972, Bill married Lila Ferguson, who welcomed Bill and his children into her Charles City home. Bill quickly endeared himself to Lila's parents (Mark and Gladys Ferguson), sisters (Jean Meyer and Helen Bullen), nieces, and nephews. Bill was a handy man, capable of making or fixing almost anything. He restored a Model-T that once belonged to Lila's parents, an Oliver Row Crop 66, and an Oliver 550, which he often drove in Fourth of July parades and tractor rides. He was a talented mechanic, a skill he shared with his son. In addition, he was a woodworker and enjoyed creating his own inventions, including the do-nothing machine. Other pastimes included fishing, mushroom hunting, tomato gardening, and deer hunting. One of his greatest loves was flying airplanes. (You're flying high now, aren't you, Dad?) Bill was a longtime member of the Cornerstone Lodge in Marble Rock and the St. Charles Lodge in Charles City. He is a Past Master of both and recently received a certificate of sixty-year membership from the Grand Lodge of Iowa, A.F. & A.M. He was also a member of the El Kahir Shrine Temple. Bill enjoyed many family vacations to visit his sister in Bethesda, MD, where he watched early landings of the Concorde and proudly located the oldest gasoline engine--a Hart Parr tractor from Charles City, IA--in the Smithsonian Museum. He made many fishing trips to Leech Lake, MN, a trip to the Badlands and Mt. Rushmore, and a trip to visit his brother in San Francisco, where he landed minutes before the Great Quake of 1989. Living family members include his children: Jane Ferch of Clarksville, Anne (Don) McWilliams of Dumont, Mary Lou Shaw of Marble Rock, Celia (Randy Sorensen) Feltus of Charles City, Shawn (Dee) Feltus of Rockford, Ruth (Greg) Hallett of Lawrenceville, GA, Tami Wright of Phoenix, AZ, and Amy (Randy) Rosser of Lafayette, CO; thirteen grandchildren: Ted (Sara) Ferch, Melissa (Eric) Thornton, Meredith (Tory Waddingham) McWilliams, John (Codi Josephsen) McWilliams, Jon (Annette) King, Jason (Lexi) King, Erin (Brad) Beasley, David and Laura Hallett, Shane and Lexi Wright, and Bodhi and Myla Rosser; four step-grandchildren: Graydon, Christine, Matthew and Danielle Marzen; eight great-grandchildren; a nephew, Pat (Ruth) Feltus; and two nieces, Rebecca (Bill) Leo and Charmaine (Phil) Meyer. He was preceded in death by an infant son, John David; his parents; his siblings: Don, Austin, Robert (Bob), Paul, and Faith Feltus; and his beloved wife, Lila Feltus. Burial will take place at the Allison Cemetery in Allison, Iowa

The family of Willard "Bill" Feltus created this Life Tributes page to make it easy to share your memories.

Send flowers to the Feltus family.