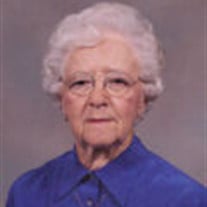 Winnifred (Winnie) Cundall, 91, of Hampton, formerly of Dows, Iowa, passed away December 8, 2010, at the Franklin General Hospital in Hampton, Iowa. Winnie was born August 30, 1919, in Clarion, Iowa, to Kenneth "Guy" and Mary Catherine "Katie" (Russell) Holmes. She graduated from Clarion High School and attended the Normal Training College in Cedar Falls after which she taught in country school for a short time. On August 30, 1939, she married Everett Earl Cundall in Eagle Grove, Iowa, and they farmed in the Dows area. Their wedding day happened to be both their birthdays. Her interests were many. She loved cooking and always had a big garden. Some of her flowers she took to the fair. She was a member of DAR and was an avid genealogy student. She was a member of the St. John's Altar society in Clarion, the Iowa Catholic Daughters, a neighborhood group, and the Dows Country Club, where she enjoyed golf. Winnie worked at the polls as an election officer. She and Everett were in a model T club and took part in parades in many locales. She loved reading, card games and Dominos. For many years she and Everett wintered in Mesa, Arizona, and had many friends there. Winnie is survived by three brothers: Don (Nell) Holmes, Huron, South Dakota; Max (Mickey) Holmes, Hampton; Dean Holmes, Cypress, California; and two sisters: Mary Lee (Jim) Sutherland, Laguna Hills, California; and Lynette (Glenn) Swinton, Marble Rock; and many nieces and nephews and their families. She was preceded in death by her parents, husband Everett, brother Kenneth, and sister Beth. In Lieu of flowers memorials may be given to Hospice of North Iowa.

The family of Winnifred (Winnie) Cundall created this Life Tributes page to make it easy to share your memories.

Send flowers to the Cundall family.